Congratulations to our 2018 WHO award winners, Lisa Cusi and Todd Blanset!

Our excursion to the Green River Taproom!

Tony Thurmond, our endorsed candidate for the State Superintendent of Public Instruction, visited Vacaville on Tuesday to share his vision of a high-quality public education for all of California’s public school students. 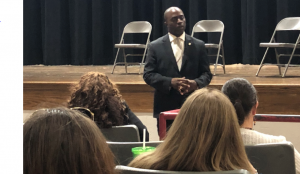 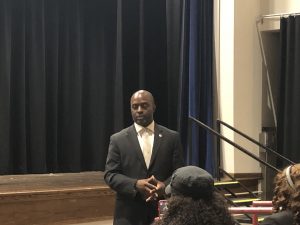 By Richard Bammer, The Reporter, Vacaville – East Bay Assemblyman Tony Thurmond said his decision to run for the state Department of Education’s top job is not so much a political consideration as it is “a heart decision.”

“I’m all in for kids,” he said late Tuesday afternoon in Wood High School’s Catwalk Theatre, where the state lawmaker, a Democrat from Richmond, laid out his vision for public education during a gathering of some 30 members of the Vacaville Teachers Association, which has endorsed him.

The teachers applauded the statement, which ended Thurmond’s 45-minute presentation, including his responding to several questions.

If on June 5 he defeats his challenger Marshall Tuck, who is backed by so-called education “reformers” and nearly sunk Tom Torlakson’s second bid for state schools chief in 2014, Thurmond will lead a mammoth state bureaucracy that is responsible for educating 6.2 million K-12 students. (Other candidates include Steven Ireland and Lily Poloski.)

Dressed in a dark suit, the 49-year-old Assemblyman thanked teachers for what they do in the face of salaries that have not kept pace with the rising costs of living in California and the ongoing teacher shortage.

A native of Fort Ord and raised by a single mother, he noted California still ranks among the lowest per-pupil funding states, at 46th, yet boasts “the fifth wealthiest economy in the world.”

A graduate of Temple University and Bryn Mawr College, Thurmond supports “fully funding” public schools and “making California No. 1 in all categories.”

To the nature of the race he faces against a well-funded Tuck candidacy, he said, “There are billionaires trying right now to buy this election … They think public education should be privatized.”

“Without public schools, there would be no Tony Thurmond,” he added, smiling.

A press release issued by the California Teachers Association noted that Thurmond’s mother was a Panamanian immigrant who raised four children alone until she lost her battle with cancer. At age 6, he left California to live with cousins in Philadelphia.

“We struggled and moved around a lot,” he said in the prepared statement. “What saved me was having teachers believe in me, support me, and set the bar high for me. I could have easily ended up in California state prison instead of the California State Assembly. I see myself every day in students who face challenges. And like teachers who believed in me, I believe in them. So, I fight to give every student the same opportunity to receive a quality education.”

Thurmond told the teachers he is committed to protect their right to organize.

As his remarks ranged widely, he recalled someone telling him to “focus on kids only with promise and potential.”

“But all kids have promise and potential,” said Thurmond.

VTA member Corey Penrose, a Vacaville High English teacher, asked Thurmond what he would tell the rank and file about his candidacy.

“You can tell them there’s a candidate who believes in professional development for teachers,” he said.

Jerry Eaton, a Vanden High foreign language teacher who serves on the CTA board of directors, asked Thurmond what he is most proud of as a lawmaker.

The CTA press release noted he is committed to ending the teacher shortage, and fights for accountability of privately run charter schools. One of Thurmond’s bills provided funding to halt chronic absenteeism and support community schools offering health, dental and other support services.

He also introduced a bill to guarantee that every student who has ever been in foster care has the money to go to college.

“To say that his vision is inspiring is an understatement,” said Tracy Begley, president of the 720-member VTA.

“Tony wants to work with us and give us the tools and resources we need to be successful — not blame us for problems we don’t have the resources to fix.”